It's the End-of-the-Line! Collaborative Automation is Ready for Palletizing Prime Time 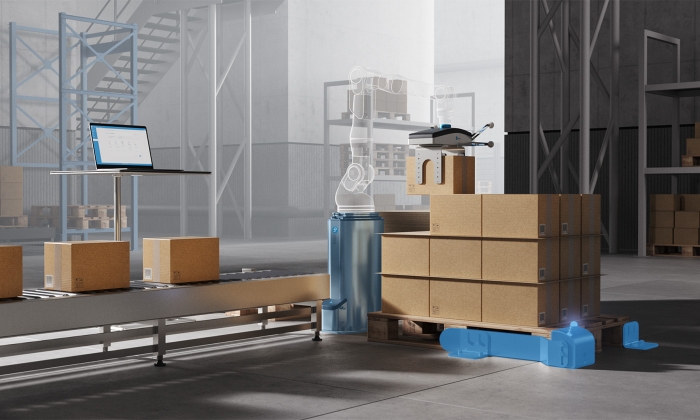 Palletizing is an excellent candidate for automation due to the repetitive and physically demanding nature of the work. Despite this, many critical end-of-line palletizing tasks are still performed manually.

The lack of automation in palletizing --especially among small and medium-sized enterprises (SMEs) -- is understandable, but it means that there is a lot of hidden potential in end-of-line palletizing operations. Traditional palletizing automation is difficult to use. Programming and deployment is a job for experts only, preferably with years of automation experience. That’s a big ask for many SMEs.

Moreover, traditional palletizing automation is also expensive and when the capital outlay is considered alongside the long deployment times, the numbers just don’t add up for many companies. The footprint is another obstacle, with traditional palletizing automation taking up a considerable amount of precious floorspace because of the need for extensive safety barriers.

And so, even today, and despite the obvious downsides and trapped potential, manual labor is used at the end-of-many-lines.

Problematic World of Manual Palletizing
Manual palletizing is tough work. It’s unergonomic. It’s repetitive. And in the United States alone, overexertion and repetitive motion account for 24% and 8% of all workplace injuries.

On top of that, the manufacturing sector faces unprecedented labor shortages at all skill levels. For many companies, this means not being able to find operatives and not being able to find skilled workers with robotics experience. All told, SMEs have faced a dual problem -- human workers are unavailable for hire and traditional automation is too costly and complex to operate.

Let’s look at the main features of collaborative automation that make it such a good fit for your end-of-line palletizing processes.

Easy to deploy (& redeploy again and again)
If traditional robot programming is a job for experts, programming collaborative automation is a job that anyone can take on –even those with no previous robotics experience. Gone are the clunky, ‘Experts-Only’ interfaces on traditional programming teach pendants. In the Collaborative Era, those systems have been replaced by easy-to-use software characterized by attractive, user-friendly interfaces.

This is a massive boost for SMEs, as it removes the complexity that has been one of the main obstacles to successful automation adoption.

Easy to deploy means easy to redeploy too, such as, for example, introducing new items to palletize, delivering massive cost savings compared to traditional automation setups. Ease of use makes it possible for people that are completely new to automation to set up an application in a fraction of the time it would take to set up traditional palletizing automation.

Collaborative automation’s high scores on usability also provide an upskilling opportunity for your existing workforce. With minimal training, operators can stop focusing on manual work and take on automation programming roles -this boosts morale and builds experience that can be relied on in every subsequent redeployment.

And, since there is no need to get teams of experts every time you need to make changes to your cell configuration, the cost of deploying collaborative automation is lowered further compared to traditional solutions. The total cost of ownership (TCO) for collaborative palletizing means that the numbers start adding up for companies. And for SMEs, it often means that deploying automation becomes financially feasible for the first time.

Cautionary Note
Collaborative automation solves many of the problems associated with traditional palletizing solutions through user-friendly software, but some interfaces are more user-friendly than others.

If your company is new to automation make sure to seek out solutions that match your end-user requirements in terms of usability, relevant training, and education resources.

Also, look for collaborative automation that is application-centered. This means automation solutions in which every aspect of the hardware and software has been designed specially to take on the specific application you have in mind –whether that’s palletizing, pick & place, sanding, machine tending, or some other tasks. Putting the application first makes for extremely streamlined deployments regardless of robotics experience. And finally, for the ultimate in speedy deployments, be sure to use collaborative automation solutions that include software designed to guide you step-by-step through the deployment process.

See the complete collaborative robotic palletizing solution and find out more about collaborative automation today by talking with one of our experts!