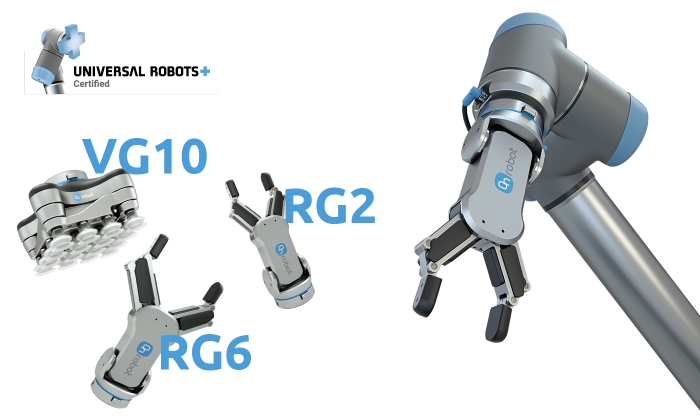 The certified URCap software provides a unified interface for OnRobot’s new versions of RG2, RG6, and VG10 grippers with Universal Robots (UR). The URCap allows the OnRobot grippers to work seamlessly with UR’s collaborative robot arms in a single program with no need to change cables or load new software when deploying additional products.

With the One System Solution launched this fall, OnRobot disrupted the end-of-arm-tooling (EoAT) industry, presenting a full line of intelligent grippers and sensors with a unified mechanical and communications interface. The innovative approach allows for quick plug-and-play tool changes and fast and easy programming across multiple production lines and applications.

The One System Solution grippers are now also part of the UR+ program that tests and certifies EoAT products for seamless use with cobots from Universal Robots. “Our unified URCap software is a key differentiator for our grippers, sensors and tool changers. Now, we have a single URCap that automatically identifies the OnRobot tool that is mounted on a UR robot,” says Kristian Hulgard, General Manager of OnRobot’s Americas division. “The end users no longer have to worry about different URCaps for multiple tools, they can effortlessly plug and play various OnRobot products; for example, an RG2 two-finger gripper can be implemented with a VG10 vacuum gripper in one cycle, achieving optimized utilization of a single UR robot.”

Early Ewing, global head of Universal Robots’ UR+ program, sees the certification of OnRobot’s new products as a great example of the continued close collaboration between the two companies. “We are delighted to work together with OnRobot in producing high-quality products for the automation market,” he says. “The URCap now allows OnRobot’s grippers to utilize all the benefits of our new line of e-Series cobots in terms of fast digital feedback and repeatability.”

OnRobot’s unified URCap can be installed in UR’s Polyscope operating system when installing OnRobot software. The installation requires the identification of just one product; the software automatically identifies additional OnRobot products. With the One System Solution, all OnRobot products have a unified mechanical and communications interface based on the OnRobot Quick Changer, which is now an integrated part of all OnRobot products. The Quick Changer allows manufacturers to simply click OnRobot grippers onto the UR cobot arm for instant deployment. The only cable coming out of the chain is from the Quick Changer, eliminating the need to disconnect/connect cables. An additional Dual Quick Changer incorporates these same new capabilities while allowing the use of two tools in one cycle, mixing and matching to suit application needs and maximizing robot utilization.

About OnRobot
Established in 2015, the company merged with Perception Robotics and OptoForce in 2018, followed by an acquisition of Purple Robotics a few months later. In April 2019, OnRobot acquired the intellectual property of Blue Workforce, a Danish company making grippers and a vision system. Now, the OnRobot product range features a wide assortment of end-of-arm tooling, including: electric grippers, force/torque sensors, a vacuum gripper, the award-winning Gecko Gripper, and tool changers. This new combination of offerings from OnRobot makes it quicker and simpler to automate tasks such as packaging, quality control, materials handling, machine tending, packaging, assembly, and surface finishing. The company plans to grow through further acquisitions in the coming years. Headquartered in Odense, Denmark, OnRobot also has offices in Dallas, Soest (Germany), Barcelona, Warsaw, Shanghai, Tokyo, Seoul, Singapore and Budapest.