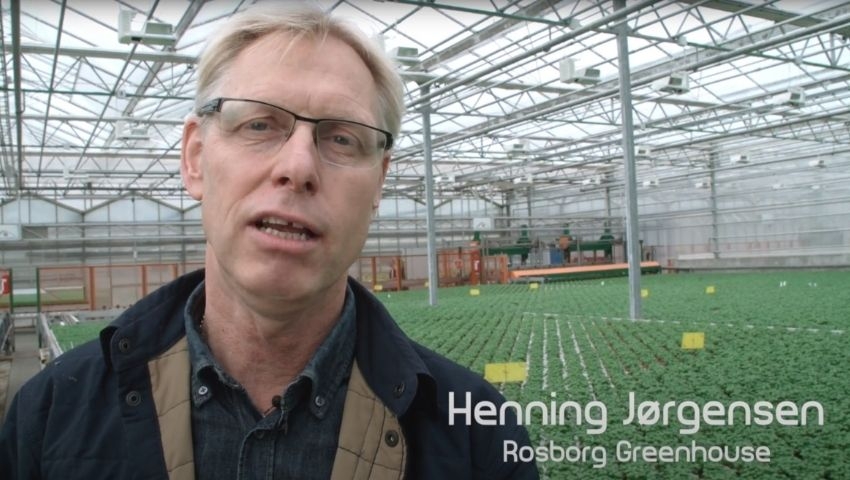 It takes great finesse to cultivate and deliver delicious, fresh herbs. It takes intelligent automation to ensure that production is efficient, competitive, and creates a good work environment. That is why Denmark’s largest producer of herbs and mini plants, Rosborg Food Holding, chose to invest in sensitive, flexible robot grippers from OnRobot to handle their plants.

The use of herbs dates back to at least 4000 years ago in Babylon. The ancient Egyptians and Greeks developed and refined the cultivation of herbs for use in the emerging medical sciences and as culinary delights. In the 21st century, robotics technology is increasingly contributing to the taste, smell and freshness of our food.

Inside the 120,000 square meters of greenhouses in Odense, Denmark, mint, dill, tarragon, miniature roses and other small delicate plants grow in an advanced production facility equipped with state-of-the-art technology. A total of 130 employees produce, pack,  manage and sell 28 million herb plants and 12 million mini flowers annually under the product names Gloria Mundi, Økologihaven and Eurostar plants. To accomodate a growing demand and a wide range of products, as well as seasonal fluctuations, they streamlined and automated their production line.

"We are continuously working to improve the productivity and efficiency of our processes. The automation solution we implemented relieved our employees of monotonous, physically demanding tasks that they would prefer to avoid anyway. Robot technology also helps us reduce the amount of overtime and temporary workers we need,” says Henning Jørgensen, Partner and Operations Manager, Rosborg Food Holding.

The Danish nursery has produced spices and mini flowers for both retail and restaurants since 1980. In 2013 a new owner began the process of radically modernizing the company’s entire production. The new owners invested 37 million Danish crowns in new high-efficiency greenhouses equipped with automation technology and robots. At the same time, Rosborg expanded its range of products to meet the growing demand for herbs not traditionally used in Scandinavian cuisine. In addition to robots and employees, they also employ 10 different kinds of beneficial insects, which eliminate pests on the plants in the greenhouses naturally.

One of the latest investments in automation is a flexible packaging line featuring a cobot from Universal Robots, fitted with an RG6 gripper from OnRobot. The two “fingers” of the robot gripper have built-in intelligence and advanced technology that mimics the way humans instinctively use our sense of touch when we grasp things and move them.

The automated packaging solution is so intuitive to use that staff without robot experience easily can switch the solution to packing other types of products by changing settings on the robotic arm’s touch screen. The RG6 robot gripper’s software is installed in the robotic arm similar to how you install an app on a smartphone.

“We were looking for a gripper to lift herbs and flowers gently without squashing them. We chose an RG6 gripper because of its wide and gentle grip, as well as its ability to be precise and flexible. Our new solution with the cobot and gripper automates the task of folding cardboard boxes and placing cut herbs into the boxes. We were looking for a quick return on investment. We already have our next project lined up which is to buy another cobot and gripper to feed a cutting machine that cuts the herbs. The arm and gripper will locate and gently grab the plant, then turn to place them on the line to the cutting machine,” explains Henning Jørgensen.

Seasonal fluctuations made profitable with robots

Henning Jørgensen sees a huge potential for Rosborg to use several collaborative robots and grippers, i.e., “robotic arms and hands” because the ROI is so quick.

“We want to ensure a larger surplus capacity for daily operations, so that we can also double our production in peak season, during Christmas, New Year's, and Easter, without losing profits on paying overtime or for extra temporary workers. As it is today, our earnings shrink during large production periods. Employees in production are also very positive about the prospect of collaborative robot technologies helping them produce more efficiently and minimizing overtime,” says Henning Jørgensen.

Rosborg Denmark chose a playful and engaging approach to introduce robot technology to the nursery.

“We bought a robot arm and a gripper from MELCNC before we knew exactly what tasks it would perform. We experimented and made some fun applications, and it actually meant that the staff could see that cobots are just an easy and useful tool. For example, we programmed the cobot and the gripper to write the chairman’s name on a blackboard on his birthday, and at the inauguration of a new greenhouse, the robot handed the scissors for cutting the red ribbon to Jane Jegind, City Council member in Odense,” says Henning Jørgensen.

Facts about collaborating robots and grippers

The new generation of collaborating robot arms poses completely different requirements for the robot grippers – or rather the tool at the end of the robot arm. What the tool is capable of doing is crucial to the chosen task. The more user-friendly, flexible, and gentle the gripper is, the greater the variety of tasks that can be automated, and the faster the robot and the gripper will pay off.

To be fully collaborative, a robot product must meet three criteria: First, it must be safe for people to work next to the robot without using protective shielding. Second, it must be user-friendly and easy to install, program, and operate. Third, the product must be profitable and efficient. OnRobot’s grippers meet all these criteria. They are available in two sizes: RG2 with a lifting capacity of 2 kg and RG6, which has an even wider grip and can handle items up to 6 kg.

While traditional robot grippers typically are powered by compressed air, OnRobot's electrical and digital grippers eliminate the tangle of cables that often are seen attached around the robotic arms, which can get entangled with the robotic arm as well as other installations. What really sets the grippers apart is that the gripper operates on the internal wiring inside the robot itself, and the gripper’s user interface and operator controls are integrated into the robot’s user interface.