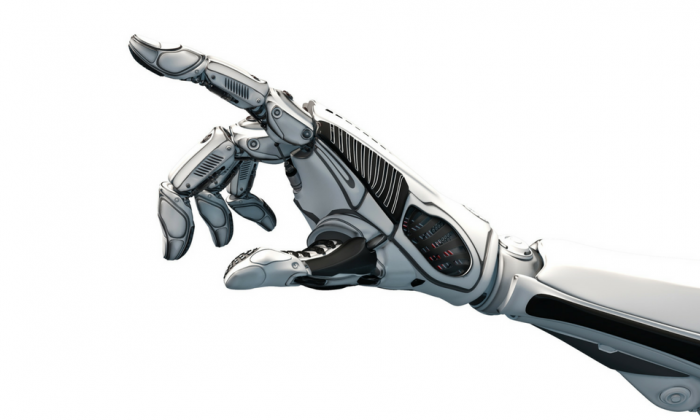 To grant competitive advantages, industrial robots must become sensitive and smart. This is where sensors and software come in: Equipped with these, collaborative applications widen the scope of automation.

When the first industrial robots entered the factory halls, their advantages were primarily characterized by force: With increased working speed and precise repeatability, they could easily handle huge payloads. Correspondingly, the first industry to use them large-scale was automotive manufacturing, where robot arms performed basic tasks such as picking and placing heavy parts.

Nowadays however, demands have changed:

These challenges make it inevitable for manufacturing companies to rethink their production ways.

At this point, the idea of collaborative robotics comes in: Robots and humans start working side by side, with the machines relieving workers from strenuous tasks and granting support just where it is needed.

However, to safely work next to humans, robots need to adapt: They must be able to see, feel and think. Only equipped with these skills can they comprehensively provide manufacturers with the benefits of automation, leaving the fences behind.

To acquire human-like capabilities, robots need to be fitted with the right sensors. Proximity and thermal sensors, force / torque and optical sensors enable a robot arm to perceive relevant variables like distance, force or speed. With their help, robots can control their force and apply it in a considerate way. Thus, they can react to their surroundings immediately and perceive human touch.

The Polyskin Tactile Gripper for example has integrated tactile sensors at the tips of its two, individually actuated fingers. They enable it to provide accurate position-orientation and force data, making it possible to assess the grip quality. Thus, the gripper can handle even delicate items precisely and prevent dropping.

However, to live up to the potential of automation, robots not only need senses, but they also need intelligence.

To make a robot smart, it takes the right software. OnRobot products are equipped with software packages that make them capable of performing complex tasks.

Furthermore, the pre-programmed software packages make the applications’ setup easier and enable users to perceive the advantages of automation faster. Their intuitive user interface adds to the same idea.

Software and sensors: maximizing the benefits of automation

To get the most out of automation, robots therefore need senses and brain. This is where automation becomes sensitive and intelligent. Only at this level do manufacturers benefit from advantages like increased process efficiency, short integration time and fast return on invest. In the end, only the application as a whole makes a difference.