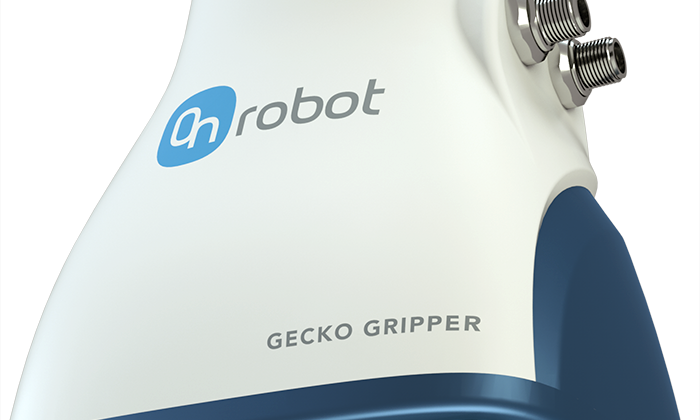 DALLAS, TX — JANUARY 23, 2019 — OnRobot, a global leader in end-of-arm tooling for collaborative robots, announced today it will be co-exhibiting next month with Futura Automation at the ATX West show, in Anaheim, CA, February 5-7. OnRobot kicked off the new year by shipping pre-orders of its newly-available Gecko Gripper, that uses millions of micro-scaled fibrillar stalks that adhere to a surface using powerful van der Waals forces — the same way that geckos climb. On display for the first time at the ATX Show, the Gecko Gripper lets robots pick up flat, smooth objects with significant energy savings over existing grippers such as vacuum grippers, which require compressed air that is costly, power-intensive, and bulky. The Gecko Gripper interfaces with any type of robot and can pay for itself in eight months in cost savings for electricity to compress air alone. Now being sold to manufacturing companies worldwide, the Gecko Grippers can affix to a wide range of surfaces including fragile items that vacuum grippers can’t handle. The Gecko Gripper also offers competitive advantages over electrostatic grippers, which are weaker and require high-voltage systems to operate.

Based on the nimble gecko lizards native to the Southern Hemisphere, in its initial design the Gecko Gripper progressed from a Stanford research project to the NASA Jet Propulsion Lab to industry through multiple collaborations. The original NASA use-case was for salvaging and repairing satellites such as solar panels, given the Gecko Gripper’s unique ability to operate in a vacuum. Perception Robotics created the first industrial grippers with new polymer research that increased gripping strength by 5X. Perception was then acquired by OnRobot, which is dedicated to developing and commercializing innovation that helps manufacturers take full advantage of collaborative robotics.

“The market reaction to the Gecko Gripper has been extremely positive,” says Kristian Hulgard, OnRobot’s General Manager for Americas. “We see the gripper now challenging traditional application and material handling design in a wide range of delicate tasks such as picking up porous and fragile objects like PCB boards,” says Hulgard, explaining that the Gecko Gripper excels at picking up objects with holes that vacuum grippers cannot address as they lose suction when air passes through openings in the object.

In addition to the Gecko Gripper, OnRobot will have its RG2-FT on display at ATX, a new gripper now generally available to manufacturers around the world. An update to OnRobot’s first edition, the RG2-FT now has built-in force/torque sensing, supporting work in piece detection and centering. With inbuilt 6 axis F/T and proximity laser sensors at the fingertips, the RG2-FT is the first intelligent gripper on the market that can see and feel objects, thus ensuring faster deployment of collaborative applications and ultimately higher productivity.

“The RG2-FT gripper is a sophisticated—yet entirely accessible—new piece of technology that manufacturers with tasks such as assembly, insertion, and quality inspection are now requesting,” says Hulgard. “The intelligent force feedback provided by the gripper’s sensors will also help operators in adjusting their applications for optimal design and positioning.”

OnRobot products are available in North America through a rapidly expanding partner network.