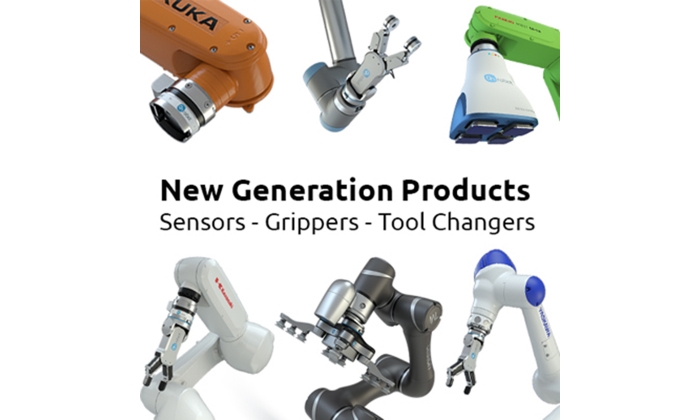 Odense, Denmark, September 10, 2019: OnRobot A/S continues to drive its mission of making robotic applications faster and easier to implement with a unified mechanical and electrical interface for any OnRobot end-of-arm tooling (EoAT) that dramatically simplifies automation. Now, with a single robotic system, single platform for programming and training, and single vendor relationship, manufacturers have access to a full range of tools, full robot compatibility, and virtually unlimited possibilities for collaborative applications. This new one-system solution speeds deployment so manufacturers save time and money and can quickly realize the benefits of automation.

Drive to One-System Solution Incorporates Electronics into Integrated Quick Changer
At Automate Show in Chicago in April, OnRobot A/S released its Digital I/O Converter Kit, which allowed OnRobot end-of-arm tools to work with a full range of leading collaborative and light industrial robot brands including Universal Robots, KUKA, FANUC, Doosan, Techman, Yaskawa, Mitsubishi, Kawasaki and Nachi. Building on that initiative, all OnRobot products now have a unified mechanical and communications interface based on the OnRobot Quick Changer, which is now an integrated part of all OnRobot products. An additional Dual Quick Changer incorporates these same new capabilities while allowing the use of two tools in one cycle, mixing and matching to suit application needs and maximizing robot utilization.

“Manufacturers are demanding more from their robotic applications, and end-of-arm tooling has become the key to optimizing their investments,” says OnRobot CEO Enrico Krog Iversen. “This integration of our Quick Changer across our current product lineup makes it easier than ever to switch between tools and robot types, allowing flexibility and reducing downtime for more efficient production and faster automation ROI. This brings us another step closer to a unified OnRobot one-system solution that makes it easy, fast and cost-effective for manufacturers to build collaborative applications, no matter which robots they choose.” 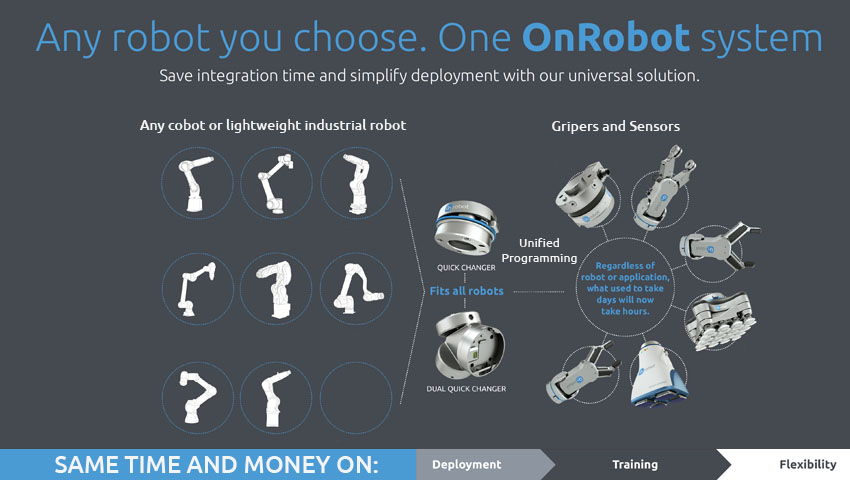 Research Director for Intelligent Operational Systems and Robotics at IDC, Remy Glaisner, welcomes the One-System solution: "The benefits of robotics across the industrial operating environment is routinely hindered because of systems' limited versatility," he says. "Actuation capabilities are therefore critical to the applicability of solutions across a variety of manufacturing use-cases. An adaptable end-effector solution translates into accrued technology adoption, enabling a new level of nimble operational effectiveness."

Unified Platform Across Tooling and Robot Brands
With the OnRobot Quick Changer, a single cable provides a universal interface for tools and communications, so there is no need to disconnect cables when changing tools, and extended communications options support a full range of robotic platforms.

For Universal Robots robot arms, OnRobot now provides a unified URCap that allows all tools to work together, even in a single program. For example, using the new Dual Quick Changer, manufacturers can use an RG2 two-finger gripper together with a VG10 vacuum gripper in one cycle, achieving greater utilization of a single UR robot. Thanks to the unified programming solution, the setup time on UR robots is now faster than ever.

Fieldbus solution for other robot brands:

All OnRobot products now have a unified communication platform using standard fieldbus protocols, making it easy to program the tools, regardless of robot used. With the new fieldbus protocols, manufacturers can easily set software values and use more functions via a standard Ethernet cable, supporting an increased level of sophistication with a simple plug-and-produce approach that doesn’t require additional cables. Deployment time can be cut from 3 hours to 30 minutes, so manufacturers can get their collaborative application up and running quickly.

WebLogic for Digital I/O for any type of robots:

For robots that connect through digital I/O, the new OnRobot one-system solution includes a WebLogic interface. Using the IP address of the OnRobot Compute Box, manufacturers can sign in via the OnRobot WebClient from a phone or any other network-connected device to monitor the robot or create simple robot programs. Manufacturers can preset values and create elaborate programming logic using the feedback values from OnRobot grippers and sensors to provide finer control. This makes OnRobot tools compatible with an even broader range of robot arms and helps manufacturers get their collaborative application up and running quickly.

Continuous Gripper Improvements Meet New Customer Demands
Along with the new one-system solution to simplify automation, OnRobot continues to improve its EoAT to meet changing market demands. The RG2 and RG6 grippers have been re-designed to be stronger, more sensitive and easier to mount. The grippers also now come standard with TÜV certified Cat. 3, PLd level safety guards. The Gecko Gripper’s pads have been improved with a maximum payload, depending on the material, now up to 6.5kg.

About OnRobot
Established in 2015, the company merged with Perception Robotics and OptoForce in 2018, followed by a an acquisition of Purple Robotics a few months later. In April 2019, OnRobot acquired the intellectual property of Blue Workforce, a Danish company making grippers and a vision system. Now, the OnRobot product range features a wide assortment of end-of-arm tooling, including: electric grippers, force/torque sensors, a vacuum gripper, the award-winning Gecko Gripper, and tool changers. This new combination of offerings from OnRobot makes it quicker and simpler to automate tasks such as packaging, quality control, materials handling, machine tending, packaging, assembly, and surface finishing. The company plans to grow through further acquisitions in the coming years. Headquartered in Odense, Denmark, OnRobot also has offices in Dallas, Soest (Germany), Barcelona, Warsaw, Shanghai, Tokyo, Seoul, Singapore and Budapest. For more information, visit www.onrobot.com.