What is end of arm tooling for robots? 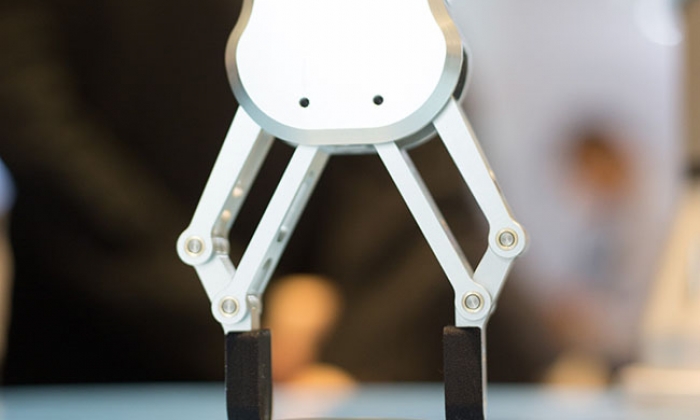 If you have ever tapped into the subject of collaborative robotics, then you have most certainly encountered the terms “end of arm tooling” or “EoAT”.

EoAT – also known as end effectors - are crucial for unleashing the automation potential of collaborative robots. One could even say that there will be no automation advantages without at least one EoAT.

Though many might credit the robots solely for the optimization benefits without ever mentioning EoAT, it is in fact the EoAT that are the unsung heroes of process automation. In this article, we present the most common EoAT for collaborative robot arms.

Types of end of arm tooling for robots

Grippers are a very common type of EoAT. They are used for grasping objects and are especially suitable for assembly and pick and place applications.

Sensors extend your automation possibilities as they provide your robot with a sense of touch. By attaching a sensor to your robot, you grant it the ability to work with fragile objects and perform delicate operations that would otherwise need the finesse of a human hand.

When it comes to tools as end effectors, the sky is the limit. However, in manufacturing companies, certain tools are more prevalent than others, e.g., shears, drills, welding torches, paint guns, deburring tools etc. Some choose to combine their tool with a sensor to gain optimal control of the production process.

Tool changer systems are designed to add flexibility to robotic automation processes by enabling robot operators to change tooling quickly and without hassle. A robotic tool changer facilitates easy and quick change of tools - with just a few clicks, you can, e.g., switch your welding gun out with a spray gun. Newer tool changers are designed to be lightweight as to not unnecessarily impact the payload of the robot arm. Some grippers have built-in tool changers.

As you can see, EoAT are crucial for optimizing processes. Although there is no doubt that robot arms are essential for achieving this goal, neither productivity nor quality will improve unless at least one end EoAT the picture. Thankfully, both robot arms and EoAT nowadays have accessible prices, meaning businesses of any size can get started with automation almost immediately.